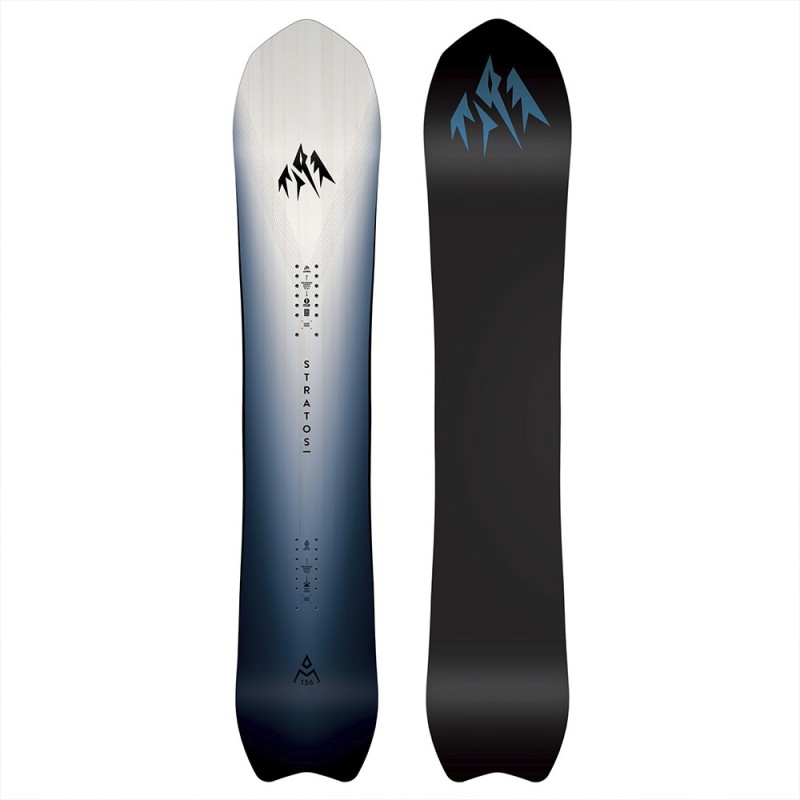 The playful snowboard ideal for all-conditions freeriding, freestyle and carving

The new Stratos is a hybrid all-mountain board built with the body of a directional freeride board and the spirit of a freestyle board.

The Stratos has a playful board feel thanks to a narrow sidecut and friendly flex, but the 10mm of taper and 3D Contour Base 3.0 give it the float and turn performance of a pow board. The directional rocker profile and Traction Tech 3.0 keep the Stratos locked on edge accelerating into carves and the textured Eco-plastic topsheet and Basalt stringers add torsional response and reduce board chatter in rough terrain. The Stratos also features our new Float Pack inserts. The Float Pack offers a setback stance option for the deepest days. For improved sustainability, the Stratos is built with Bio Resin instead of standard petroleum-based epoxy and an Ultra wood core.

Traction Tech 3.0
Traction Tech 3.0 features three bumps per edge (front binding, board center, back binding). The middle bump is slightly bigger than the outside bumps for better grip.

Blunt nose
How a board glides in powder, crust, corn or any snow more than an inch deep, is dictated by it’s front contact point and just past it. Next time you are in soft snow watch how much snow comes over the corner of the nose near the contact point. The billowing snow coming out from behind the tip means you are plowing through it which is obviously slowing you down. By adding a blunt nose you get the float benefits of a much longer nose without the ‘snow plow’ rounded tip and it’s extra swing weight. - Jeremy Jones

Directional Flex Pattern
Off set tip-to-tail flex pattern that is designed for directional freeride boards. The nose, center of board and tail are slightly different stiffnesses to help lift the nose, sink the tail and improve stability at speed.

V-Core
Jones exclusive wood core profiling that offers a stable and playful board feel. The wood core is softer between the feet for easy turn initiation and stiffer in the nose and tail for stability riding through uneven terrain and landing airs.

A hybrid rocker/camber flex pattern defined by more tip rocker then tail rocker and camber between the bindings. The rockered tip floats the board’s nose and improves maneuverability while the camber underfoot provides edge hold and response. A slightly rockered tail maintains the power and stability of a traditional board but helps keep the tail catch-free initiating turns and landing switch.